I’ve never been up to a fire Lookout before even though there are quite a few in Washington that you can hike to. The weather was looking pretty nice and we were going to get a later than normal start so the 2.6 mile hike seemed to be a good one for a gaggle of teenage girls and a younger brother.  I told my daughter we would be leaving at 10 am so she said I better start waking her up at 8 am so that she would actually get out of bed by 10. Gotta love summertime!

We all made it out on time and the six of us loaded up in the truck to head east on highway 2 past Index. Surprisingly there were only a few cars at the trailhead.  We started up the trailhead and quickly realized the kids hiked at a much faster pace than Tami and I!  They cruised right along barely breaking a sweat, pausing several times for us to catch up. Oh to be 13 again!

As we neared the top walking through the first we could hear a couple trees creaking as they swayed slowly in the wind. Someone had put a sign on the side of the trail saying one of the trees would be falling down soon. It sure sounded like it!  After gawking for a few minutes we all decided maybe we should move further away just in case. Better to be safe than running for safety last minute!

The Lookout was pretty cool. A braced wooden structure that had about five floors of stairs to climb. The view at the top was pretty amazing. The skies were so blue with just a couple wispy clouds floating by. We took a short break at the top to have a quick lunch then we were off. Pretty sure the kids ran the whole way down the trail back to the truck.

We even stopped at the river to cool off the feet. For us it was the feet but the kids decided to go swimming!  Great day getting the kids outside and on the hiking trail!  Might even get them out for an overnight trip to try out the new hammocks! 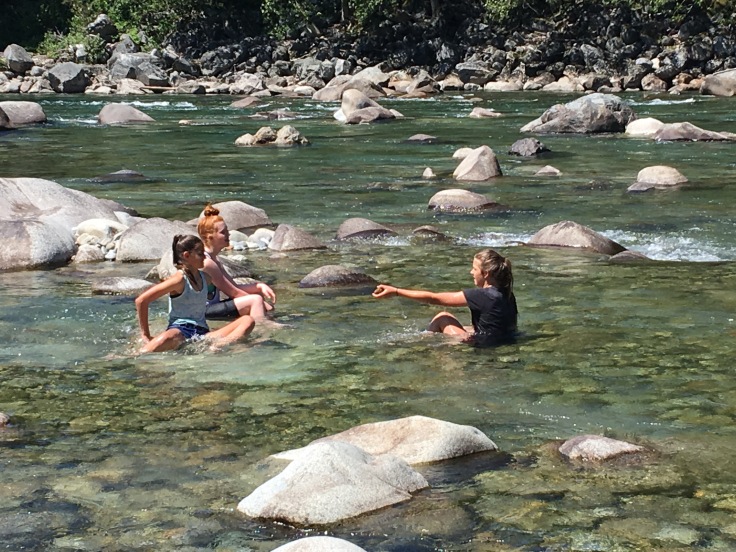