So my hiking buddy Todd and I have permits to summit Mt St Helens in June so we have some training hikes to get in. We’ve already done Mailbox Peak so another recommendation was Mt Teneriffe. It seemed manageable so we decided to give it a whirl! I’ve hiked to the falls before and that’s a fairly easy hike so I figured this one was good. There is a new trail and an old trail. The old trail goes by the falls then takes you up to the top. It’s much shorter than the new trail but quite a bit steeper. The hillside is eroding so they are trying to move people over to the new trail. We opted for new trail up and old trail down. Probably not a smart idea with the upper trail conditions!

I’m researching this hike many people compared it to Mailbox. I’m honestly not sure how that comparison works. They are nothing alike! Mailbox is short and steep! New trail Teneriffe is long! And steep!

We started out in dirt and hiked for a couple miles before we hit snow consistently. It became deep quickly!! Lots of post holing up to the knee! Slipping and sliding even with microspikes. We spend so much energy trying to maintain forward movement it was tiring!

The new trail just seemed to go on forever. We really weren’t able to follow any real trail once we started to climb. We were just meandering through the trees looking for other footprints.

We passed a lost lizard that was stuck in a deep footprint. He couldn’t get out and was so lethargic. Todd moved him over to the dirt so hopefully he survived. He wasn’t the only crazy being out there! We actually got passed by 3 trail runners! Yes running up a snow covered mountain in spikes! And short shorts!!! He must have been freezing!! His skinny legs were so red! It made me cold!

We stopped along the tree line to grab some lunch. I was starving and was quickly coming to terms with the fact that I had not properly fueled for this hike. Too much energy spent and not enough in reserves. It was depleting fast. The spot was stopped T was calm and sheltered but it felt like the temperature had dropped at least 20 degrees. Both of us noticed the temp drop as we quickly put on our puffy jackets and heavier gloves.

After lunch we kept moving on. It felt like we were walking on a treadmill. Consistently moving but going nowhere! We finally made it over and out one ridge and headed to another when we finally saw another group of hikers! We found out we were fairly close to the summit. Just a bit more climbing and we came into a clearing and false summit. The weather was all clouded in so we had no view. I had reached the “wall”! I knew I was on empty and I was well aware that I had 4-5 miles to go down to get back to the parking lot and the trail down was steep and required good concentration. Todd hiked up to the actual summit and I stayed at the false one. Ate a bit more and got more fluids in me.

The route down was sloppy. The snow was not in good condition which made going downhill difficult. Losing traction was a frequent occurrence! We finally made it out of the snow and onto the dirt trail which was quite slick due to wet exposed tree roots. We passed a group that had an injured hiked. Search and rescue was on their way up to help her down. I swear we passed at least 30 SAR personnel on their way up. We later learned it took them over 10 hours to get her down. SAR is all volunteer!!! Great work they do!

The falls were stunning as usual! It was a nice break from the concentration needed from the huge step-downs on this trail. Going down this trail was not a smart idea!

Walking back into the parking lot I’ve never been so happy to see my truck. I’ll do that hike again! Next time I’ll make sure I fuel and hydrate appropriately beforehand!! 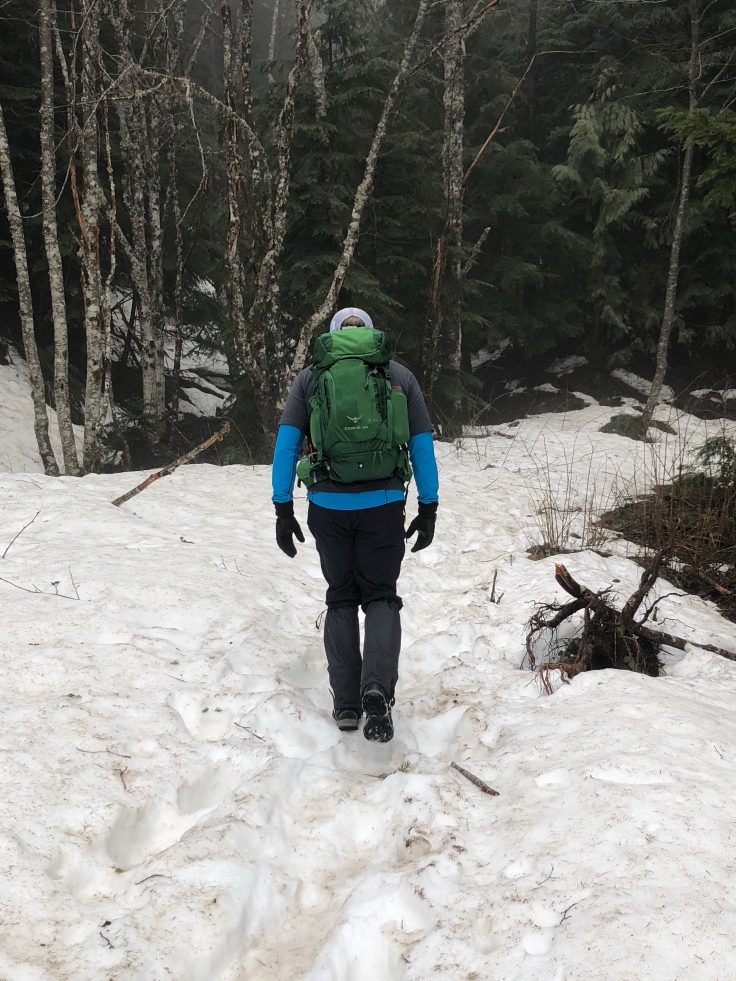