Valhalla is a Norse legend where the God Odin created a special place for only the most valiant warriors who died in battle.  Odin honored these valiant warriors by creating an alternate place in the universe where select warriors are chosen to enter.  Within the halls of Valhalla these warriors fight during the day as warriors in epic battles, only to come home at night to feast on a marvelous meal and be healed of their wounds so they can fight again the next day.  Entrance to Valhalla is revered at the highest honor.  Warriors are treated like Kings.  According to the Old Norse Poem Grimnismal, “Valhalla is made of shields, and has spears for its rafters.  Seats made of breastplates surround the many feasting tables of the last hall.  It’s gates are guarded by wolves, and eagles fly above it”.  Valiant warriors head into battle with the cry “‘Til Valhalla”!

It seems only appropriate on Veteran’s Day we honor our valiant voluntary warriors who signed up to defend our land.  Portions of California are under their own fight.  Residents losing their homes and more devastatingly their lives.  First responders putting their lives in danger to rescue others.  The sacrifices individuals make for the safety of others.

The day started out crisp.  The fall nearly winter air leaving a thick layer of morning fog covering the valley.  The coolness to the air cut right through my fleece jacket, quickly reminding me why I love my puffy!  As we headed up Steven’s pass the skies cleared and we were treated to beautiful blue skies.  There is something about Washington mountains.  The rock is grey with dramatic edges.  They are capped with fresh snow, set against a deep blue sky.  The road off Highway 2 just over Stevens Pass had a dusting of snow that covered the mud.  In the morning it was quite slick but manageable.  We arrived at the parking lot to about 6 other vehicles.  Clearly it has snowed in the last few days as the ground was covered in light, fluffy snow that was about 6 inches deep. Not a sound could be heard.  Only the crunching of snow under our boots.

The trail starts off meandering through the forest.  A stream is nearby, but it honestly sounds like a waterfall is in close.  It just turned out to be a heavy stream.  The trail initially was a bit muddy with noticeable amounts of water that were frozen making for an interesting path to maneuver.  Although there are several switchbacks the elevation game is pretty mild.  Once we hiked through the main forest section, the snow depth increased on a fairly steady basis.  There is a nice trail through the snow, that is easy to follow.  At points the sides of the trail are a couple feet deep with snow.  The views along the way are ridiculous!  It always reminds me of Whoville.  Large pine trees covered with puffs of snow.  The tops of the trees bend over in a curl from the weight of the snow.  If you’ve ever seen The Grinch, you know exactly what trees I’m talking about!  Who doesn’t love walking through Whoville!!!  Almost broke out into song because you know Cindy Lou Who just wanted the Grinch to feel loved, “Welcome Christmas, while we stand heart to heart and hand to hand”.  You can admit it.  You are singing along:)

Well, back to the trail.  We had the most perfect sun for this hike. It made the snow glisten.  Each snowflake could be seen as it sparkled in the sunlight.  It really was quite spectacular.  At the top of the Ridgeline you break out of the trees and get your first view of Lake Valhalla.  There is something about alpine lakes in Washington.  They each have their own look.  Different colors.  This one is a deep dark blue, covered with a light layer of ice.  The shore of the lake is actually sand.  An honest beach.  I bet this lake is quite popular in the summer for swimming and camping. Not nearly the hike of Colchuck.  We sat lakeside while we ate our lunch.  It was so still.  No sounds.  No wind.  Just pure relaxation, soaking up the sunshine and basking in the beauty of the surrounding rocks.  Grey jays are quite abundant her and were buzzing the heads of other hikers at the beach.  I got to witness my first marriage proposal right next to us.  That was cute and boy was she surprised!

The hike out was just as beautiful as we got to see different sights as we were facing the opposite direction.  The ice on the trail had melted from the day of sun.  This trail intersection with a section of the PCT, so I can actually say I have hiked on the PCT.  A very short section of the PCT, but still it was the PCT!!!

I love winter hiking here.  It is so surreal and feeds your soul.  Seriously, like how did we get so lucky to live in such a beautiful state.  Were we the chosen ones, who lived a valiant life.  Hand selected by Odin to live in the halls of Valhalla.  If this isn’t Valhalla, I can’t imagine how spectacular it must be.

Blessed are the Peacemakers, for they shall be called the Children of God. 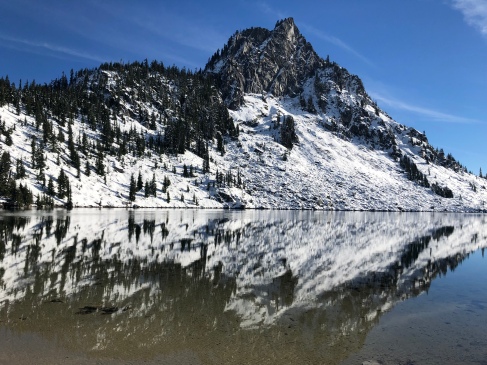 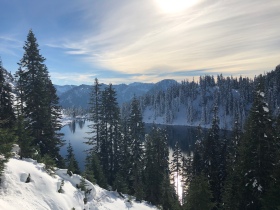 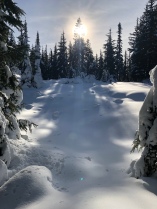